About the past, which was not …

On May 23, 2014 to October 31, 2014 gallery “RatsioArt” Planetarium St. Petersburg will be held an exhibition “Steampunk or parallel realities.” The exhibition will feature works of sculpture and painting, interactive installations, unusual library in the style of steampunk and more. 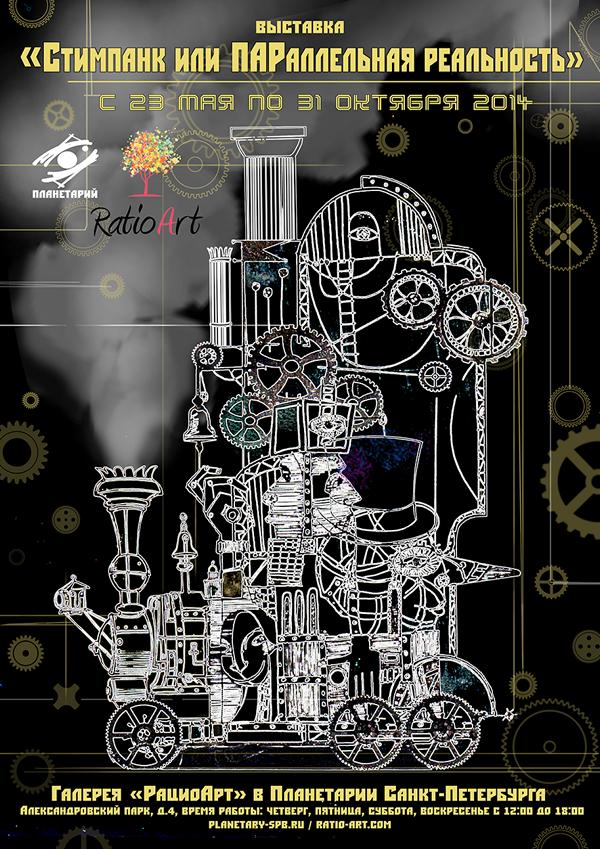 In the creation of the exhibition attended by the artists:

Steampunk – it’s so common phenomenon of modern culture, you are likely to come across it many times, even if you are the very word seems unfamiliar and exotic at first glance. Steampunk (from Eng “steam”, ie, the “steam” and “punk”, ie, “a custom that goes beyond the accepted norms.”) – Is a broad trend in contemporary culture, using stylistic code Viktorianckoy era for expression nostalgia for a world in which the mechanisms are not yet naked function, in which each gear, apparatus, the mechanism did not soulless “geeks”, and people with the aesthetic taste, in a world in which opportunism and meanness are not yet synonymous.

You could say that steampunk – a real parallel reality in which RatsioArt gallery visitors will be able to enter through the doors of contemporary art. Here you will see mysterious characters like dolls with a propeller or a robot made of brass and wood, as if born at the 19th century, unprecedented accessories and pieces of furniture that could easily decorate interiors on Baker Street 221-B, steam submarines, balloons …

Make sure to add that steampunk – is not only art, but also a way of life! You can dress in steampunk style, to create and to dance to the music in the style of steampunk, travel around – stimpankovski. Our workshops will help in the development of steampunk as a personal style, the main thing that you have moved a thirst for adventure, endless romanticism, fantastic ideas and dreams of worlds, where in the sky hovering ships, airships, on the roads at breakneck speed rush steam carriages, and in the kitchen near the steam dishwasher, gleaming brass arrow is the most common time machine.

The opening ceremony will take place on May 23 at 18:00. On presentation invited the brightest representatives of the subculture. During the exhibition will be conducted tours, as well as master classes in design, accessories and classes on animation in the style of steampunk for adults and children. Watch for information on sites and planetary-spb.ru ratio-art.com.